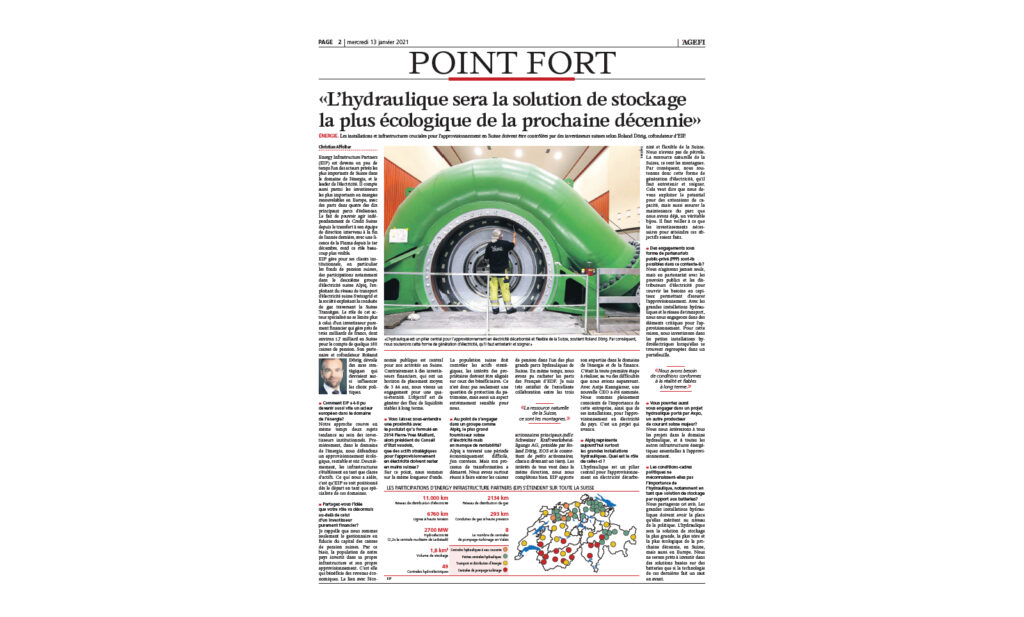 ENERGY. Facilities and infrastructure that are crucial for supply in Switzerland must be controlled by Swiss investors, according to Roland Dörig, co-founder of EIP.

Christian Affolter, originally published by Agefi on January 13, 2021 in French.
Download the original article or view it on Agefi.

Energy Infrastructure Partners (EIP) has quickly become one of the most important private energy players in Switzerland and the market leader in the electricity sector. It is also one of the largest investors in renewable energy in Europe, with shares in four of the top ten wind farms. Being able to act independently from Credit Suisse since the transfer to his team of management at the end of the year last year, with a Finma license since 1st December, makes this role very much more visible.

On behalf of its institutional clients, in particular Swiss pension funds, EIP manages stakes in, among others, the second largest Swiss electricity group Alpiq, the operator of the Swiss electricity transmission system Swissgrid and the company operating the gas pipeline through Switzerland, Transitgas. The role of this specialized player is no longer limited to that of a purely financial investor who manages almost three billion francs, including about 1.7 billion in Switzerland on behalf of some 180 pension funds. Its partner and co-founder Roland Dörig is unveiling strategic directions that should also influence political choices.

How has EIP been able to become a European player in the field of energy so quickly?
Our approach simultaneously covers two topics that are trendy among institutional investors. Firstly, in the field of energy, we defend an ecological, profitable and secure supply. Second, infrastructure is establishing itself as an asset class. What helped us is that EIP positioned itself from the outset as a specialist in these areas.

Do you share the idea that your role now goes beyond that of a purely financial investor?
Let me remind you that we are only the trustee manager of the capital of Swiss pension funds. In this way, the people of our country invest in their own infrastructure and supply. They are the ones who benefit from the economic income. The link to the public economy is central to our activities in Switzerland. In contrast to financial investors, who have an average investment horizon of 3 to 4 years, we aim at a commitment for almost perpetuity. The aim is to generate stable cash flows in the long term.

Are you implying that you are close to the assumption made by Pierre-Yves Maillard, then President of the Vaud Cantonal Government, in 2014, that strategic assets for the electricity supply must remain in Swiss hands?
On this point, we are on the same wavelength. The Swiss population must control the strategic assets; the interests of the owners must be aligned with those of the beneficiaries. It is therefore not only a question of protecting the heritage, but also an extremely sensitive aspect for us.

So much so that he decided to join a group like Alpiq, the largest Swiss electricity supplier but lacking in profitability?
Alpiq has gone through a difficult economic period, I agree. But its transformation process has begun. Above all, we have succeeded in getting the pension funds into one of the largest hydroelectric power stations in Switzerland. At the same time, we were able to buy out the French company’s shares in EDF. I am very satisfied with the excellent cooperation between the three main shareholders (Schweizer Kraftwerksbeteiligungs AG, chaired by Roland Dörig, EOS, and the consortium of small shareholders, each holding a third). Everyone’s interests are in the same direction, we complement each other well. EIP brings its expertise in the field of energy and finance. This was the very first step to take, given the difficulties we had before. Together with Antje Kanngiesser, a new CEO has been appointed. We are fully aware of the importance of this company and its facilities for the supply of electricity of the country. It is a project that is moving forward.

Today Alpiq represents above all large hydropower plants. What is the role of these?
Hydropower is a central pillar of Switzerland’s decarbonized and flexible electricity supply. We have no oil. Switzerland’s natural resource is the mountains. We therefore support this form of electricity generation, which must be maintained and cared for. This means that we have to exploit the potential for capacity expansions, but also maintain the fleet we already have, which is a real jewel. We have to ensure that the necessary investments are made to achieve these objectives.

Are commitments in the form of public-private partnerships (PPPs) possible in this context?
We never act alone, but in partnership with public authorities and electricity distributors to cover the capital requirements to ensure supply. With large hydroelectric facilities and the transmission network, we are involved in critical elements of supply. For this reason, we invest in small hydroelectric facilities when they are grouped in a portfolio.

You could also be involved in a hydropower project run by Axpo, another major Swiss electricity producer?
We are interested in all projects in the field of hydropower and all other energy infrastructures that are essential for the supply of energy.

Don’t the political framework conditions ignore the importance of hydropower, especially as a storage solution compared to batteries?
We share this view. Large-scale hydroelectric facilities must be given their rightful place at the policy level. Hydropower will be the largest, safest and most environmentally friendly storage solution in the next decade, not only in Switzerland but also in Europe. We will only be prepared to invest in battery-based solutions if battery technology takes a leap forward.

Are you committed to the political recognition of hydropower?
We have an enormous responsibility towards our investors. Our focus on the energy sector also means keeping a close eye on the political framework conditions. We have a unit dedicated to political and regulatory issues. We also have to defend the interests of our clients, Swiss pension funds, at the political level. Because these framework conditions represent a major risk factor. We need conditions that are realistic and reliable over the long term.

The full opening of the electricity market is back on the agenda. What do you think about this?
As an observer, I see that the political process is difficult. What matters to us is that this opening must be accompanied by conditions that guarantee a sustainable, cost-effective, secure and environmentally friendly supply of energy.

Is an agreement with the EU, for which Swissgrid is one of the main advocates, one of the important framework conditions?
Our electricity transmission system is connected to the whole of Europe in terms of both its physical functioning and its economic viability. It is only natural that we should define common rules. For the supply of electricity to Switzerland, which is very important to us, the functioning of the network connections must be guaranteed.

Do you expect prices on the European electricity market to rise?
There are studies that forecast prices and model demand. They establish a trend for the next decade. For each power plant in Europe, the date of its exit from the grid is known. In addition, electric mobility and heat pumps will generate additional demand. Even if consumption would only remain stable, the trend in electricity and energy prices is upward.

You also have an interest in Transitgas. Isn’t gas another energy that the Swiss Federal Office of Energy has somewhat forgotten about?
No, the federal authorities are well aware of the different scenarios for Switzerland. And this pipeline that runs through Switzerland from north to south, which has recently become bi-directional, is a stroke of political genius for Switzerland. It has convinced the Europeans, who were planning to use France as an alternative, that the current line is the best solution. It is a huge opportunity. It ensures a secure, cheap and as environmentally friendly supply as possible. Look at the proportions: 80-90% of the gas consumed in Switzerland passes through this pipe, but 90% of its capacity is used to connect Germany and France to Italy, especially northern Italy.

What do you think of the relationship between gas and electricity?
In the European context, gas plays a very important role in power generation. An exit from coal means that the share of gas, as a transitional technology, must be increased. This is because the supply has to be secured when the sun is not shining and the winds are not blowing very strong. Storage solutions, such as Power-to-Gas, are more a matter for our subsidiary companies. We prefer to invest in proven technologies. Venture capital is not part of our mandate.

You just mentioned new renewable energies. EIP’s investments in this area are mainly abroad. Why is this?
EIP is one of the top three private investors in wind farms. Europe’s largest wind farm, Fosen Vind in Norway, has just been completed. EIP has a 40% share in it. In Sweden and Finland, we work together with leading regional partners. Our principle is to invest where these technologies are fundamentally relevant. In these northern regions, there are 3,000 to 4,000 hours of full-powered wind per year. Switzerland, on the other hand, has only a quarter of this power and does not have the space required to build facilities of this scale.

How do you assess the projects or installations?
We look at which projects are best suited to the conditions in the countries in which we operate. Our goal is to make high-quality investments within a reasonable time frame. To meet our criteria, a facility must be profitable without any subsidies. Subsidies are a welcome help at the beginning, but economic independence must be aimed for. We aim at commitments until the end of the life of the installations. In this context, we prefer long-term sales contracts with electricity distributors or data centers. The interest of companies of this type attests to the relevance of a project.

Switzerland does not qualify for solar or wind energy?
No, solar energy in particular is a topic for Switzerland too. By the way, BayWa r.e. for renewable energies, in which we acquired a 49% share for our customers in December, is also by far the most important importer of solar panels in Switzerland. We may invest in solar installations directly or through our portfolio companies.

EIP in figures
Some 180 pension funds throughout Switzerland have entrusted part of their assets to Energy infrastructure partners (EIP). EIP’s first investment, which at the time was still linked to Credit Suisse, dates back to 2014. It was a CHF 50 million investment in Swissgrid. Since then, its portfolio has grown to more than one billion francs in Switzerland, and more than 3 billion in total. Based in Zurich and regulated by Finma, EIP has been operating on its own since the end of 2020 and employs 40 people.